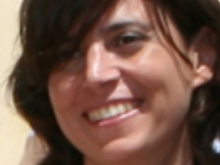 Graduated at the Faculty of Veterinary Medicine, University of Milan, in 2002. In November of the
same year she started a PhD in Veterinary Science at the same University, under the guidance of
Prof. Carlo Maria Mortellaro. Since February 2003 she attended the Section of Veterinary Surgery,
University of Parma, studying arthroscopic techniques under the guidance of Prof. Filippo Maria
Martini. In December 2006, she earned the title of PhD in Orthopaedics and Traumatology with a thesis on “Tenoligamentous
injuries of the shoulder joint”. She worked on the Atlas BOA (Breed Oriented Approach), as the editorial
coordinator and she collaborated for the orthopaedic section of Vetpedia. She spent periods of study and updating
in the United States and in Northern Ireland. In October 2008 she started a conforming residency programme for the
European College of Veterinary Surgeons, under the supervision of Dr Aldo Vezzoni and Dr Matteo Tommasini Degna.
Since 2005 she presented several lectures at national and international conferences and published national and international
papers in veterinary orthopaedics.